I have posted articles that discuss how cannabis cures different illnesses.  In those studies you will find lots of talk of cannabinoid receptors within our bodies.  This is known as our Endocannabinoid system.  When reading some of these medical studies the information can become overwhelming with all the terminology.  Now it is time for us to take a look at what our receptors and this system is all about.

People knew for thousands of years the effects of cannabis but we did not understand it. THC was discovered and synthesized in the 60s.  Then in the 90’s we discovered receptors in the brain called CB1.  The CB1receptors have been found in the brain in areas that control the coordination of movement, emotions, memory, reduction of pain, reward systems, and reproduction, yet are almost  absent in the brain stem (which affects our vital functions such as breathing). It appears that cannabinoid receptors, which modulate other neurotransmitter function in a retrograde “on demand” fashion are present in far higher concentrations in the brain than any other receptor. A second receptor was found, CB2, which are found primarily in the immune system, GI tract, liver, spleen, kidney, bones, heart, and peripheral nervous system.  The CB2 receptor appears to be up-regulated whenever there is tissue pathology.  These discoveries of the cannabinoid receptors, endocannabinoids and the related enzymes make up what is now called the endocannabinoid system and it seems to be essential in most if not all physiological systems.  The endocannabinoid system is essential to life and it relates messages that affect how we relax, eat, sleep, forget and protect.

Forms of cancer are caused through receptor activation via environmental and chemical carcinogens. Carcinogens are found in our food, air, water, and more. There are 240 known legal carcinogens on this planet.  To reverse the cancer you would need a receptor antagonist. 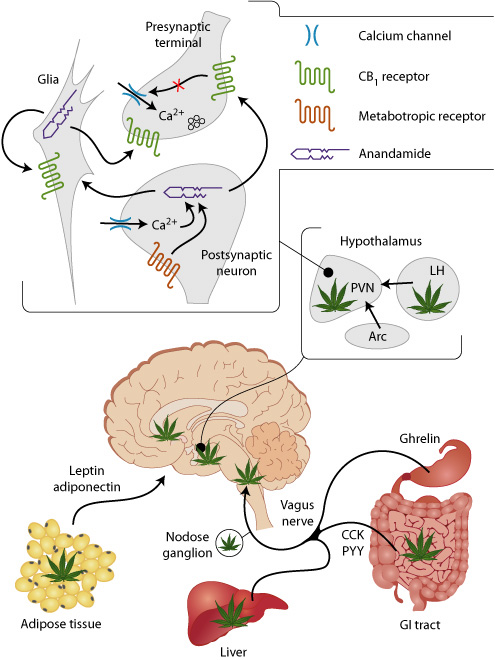 Our bodies produce a cannabinoid like compound known as endocannabinoids that are able to bind to the cannabinoid receptors and activate them the same way ingesting cannabis medicine does.  This is short lived because the endocannabinoids are metabolized by enzymes and transported to the cells.

Below is a short video by Jahan Marcu explaining this matter further.

Abstract
The endocannabinoid system (ECS) is a lipid signalling system, comprising of the endogenous cannabis-like ligands (endocannabinoids) anandamide (AEA) and 2-arachidonoylglycerol (2-AG), which derive from arachidonic acid. These bind to a family of G-protein-coupled receptors, called CB1 and CB2. The cannabinoid receptor 1 (CB1R) is distributed in brain areas associated with motor control, emotional responses, motivated behaviour and energy homeostasis. In the periphery, the same receptor is expressed in the adipose tissue, pancreas, liver, GI tract, skeletal muscles, heart and the reproduction system. The CB2R is mainly expressed in the immune system regulating its functions. Endocannabinoids are synthesized and released upon demand in a receptor-dependent way. They act as retrograde signalling messengers in GABAergic and glutamatergic synapses and as modulators of postsynaptic transmission, interacting with other neurotransmitters. Endocannabinoids are transported into cells by a specific uptake system and degraded by the enzymes fatty acid amide hydrolase (FAAH) and monoacylglycerol lipase (MAGL). The ECS is involved in various pathophysiological conditions in central and peripheral tissues. It is implicated in the hormonal regulation of food intake, cardiovascular, gastrointestinal, immune, behavioral, antiproliferative and mammalian reproduction functions. Recent advances have correlated the ECS with drug addiction and alcoholism. The growing number of preclinical and clinical data on ECS modulators is bound to result in novel therapeutic approaches for a number of diseases currently treated inadequately. The ECS dysregulation has been correlated to obesity and metabolic syndrome pathogenesis. Rimonabant is the first CB1 blocker launched to treat cardiometabolic risk factors in obese and overweight patients. Phase III clinical trials showed the drug’s ability to regulate intra-abdominal fat tissue levels, lipidemic, glycemic and inflammatory parameters. However, safety conerns have led to its withrawal. The role of endocannabinoids in mammalian reproduction is an emerging research area given their implication in fertilization, preimplantation embryo and spermatogenesis. The relevant preclinical data on endocannabinoid signalling open up new perspectives as a target to improve infertility and reproductive health in humans.”
http://www.ncbi.nlm.nih.gov/pubmed/19675519

15 thoughts on “The Human Body and Cannabis: Understanding Our Endocannabinoid System”