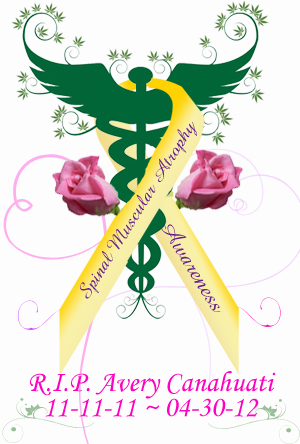 This week the nation was heart broken to learn that little Avery Canahuati, 5 month-old girl who had SMA, died Monday April 30th.  Avery became an internet sensation with her bucket list.   It is estimated that spinal muscular atrophy occurs in between one-in-6,000 and one-in-20,000 births.  Avery’s parents want to spread the word about SMA so that more research can be done to better understand SMA.  Below you will see studies where scientists have studied the interaction of cannabis compounds when applied to SMA situations as well as a little background as to how the Endocannabinoid system ties into SMA.  Please feel free to share ~ Cherry Girl

TRPV4 Mutations in Children With Congenital Distal Spinal Muscular Atrophy
Functional analysis of the novel p.P97R mutation in a heterologous system demonstrated a loss-of-function mechanism. Protein localization studies in muscle, skin, and cultured skin fibroblasts from both patients showed normal protein expression. No TRPV4 mutations were detected in four children with dSMA without bone or vocal cord involvement. Adding to the clinical and molecular heterogeneity of TRPV4-associated diseases, our results suggest that molecular testing of the TRPV4 gene is warranted in cases of congenital dSMA with bone abnormalities and vocal cord paralysis.

Alterations in the Ankyrin Domain of TRPV4 Cause Congenital Distal SMA, Scapuloperoneal SMA and HMSN2C
Expression of mutant TRPV4 constructs in cells from the HeLa line revealed diminished surface localization of mutant proteins. In addition, TRPV4-regulated Ca(2+) influx was substantially reduced even after stimulation with 4alphaPDD, a TRPV4 channel-specific agonist, and with hypo-osmotic solution. In summary, we describe a new hereditary channelopathy caused by mutations in TRPV4 and present evidence that the resulting substitutions in the N-terminal ankyrin domain affect channel maturation, leading to reduced surface expression of functional TRPV4 channels.

TRPV4-mediated channelopathies
In addition, there are some potential signaling events that can also be involved in these genetic disorders. In this review, we analyzed how and what extent certain cellular and molecular functions like oligomerization, surface expression, ubiquitination and functional interactions might be affected by these mutations.

TRPV Channels and Vascular Function
TRPV1 and TRPV4 are expressed in sensory nerves and can cause vasodilation through calcitonin gene-related peptide and substance P release as well as mediating vascular function via the baroreceptor reflex (TRPV1) or via increasing sympathetic outflow during osmotic stress (TRPV4). Thus, TRPV channels play important roles in the regulation of normal and pathological cellular function in the vasculature.

Tempo and Mode in the Endocannabinoid System
Using an extended haplotype homozygosity analysis of SNP data from the HapMap database. Significant evidence (p < 0.05) of a positive “selective sweep” was exhibited by PTPN22, TRPV1, NAPE-PLD, and DAGLalpha. In conclusion, the endocannabinoid system is collectively under strong purifying selection, although some genes show evidence of adaptive evolution.

Cannabinoid Actions at TRPV Channels: Effects on TRPV3 and TRPV4 and Their Potential Relevance to Gastrointestinal Inflammation
Cannabinoids can affect both the activity and the expression of TRPV1-4 channels, with various potential therapeutic applications, including in the gastrointestinal tract.   Cannabinol and cannabigerol were significantly more efficacious at desensitizing this channel to the action of 4-α-phorbol 12,13-didecanoate (4α-PDD) than at activating it; (iii) CBC reduced TRPV1β, TRPV3 and TRPV4 mRNA in the jejunum, and TRPV3 and TRPV4 mRNA in the ileum of croton oil-treated mice.